In October I began working with visiting researcher Gabriel Wulff on a mapping exercise at AgroCité, the urban farming cell of R-Urban, just as the bulldozers were making their presence felt on the strip of land next door. Gabriel is a PhD student and lecturer in Sustainable Design at the University of Brighton, carrying out a comparative analysis of AgroCité and Prinzessinnengarten, a popular garden, café and workshop space in Berlin. His research methodology involves making participatory maps with the users and facilitators of both spaces, inquiring into the conditions, possibilities and realities of their evolution as sites of commoning and collective cultural production.

Here in Paris it’s also an opportunity to produce a visualisation of the garden that speaks to the experience of residents and users in a way that the smartly designed graphics used (to great effect) by AAA in international art-architecture circles cannot. The posters pinned up on Agrocité’s plywood walls show intricate 3D diagrams of systems and activities that formed part of the project’s conception but may not yet have been actualised the present life of the space. Gabriel and I set out to work with members of the association who use and manage this place to generate another kind of picture of what goes on there for different individuals, particularly what kinds of value are generated, imported, disseminated and circulated through it.

We began by hand-drawing a template map of the site, including the teaching parcels used by schoolchildren, the individual garden plots, the greenhouse, the collective farm, the compost school, the building, the kitchen, the apiary, the meeting space and the chicken coop. Next we held a series of conversations with specific people, talking through how they might interpret ‘value’ in this context, where it lay for them, and how moved into, out of and through the space. Drawing together as we went, by the end of each session we had a template covered in scrawls, notes and arrows tracing territories of belonging, sharing, anxiety and collective doing. 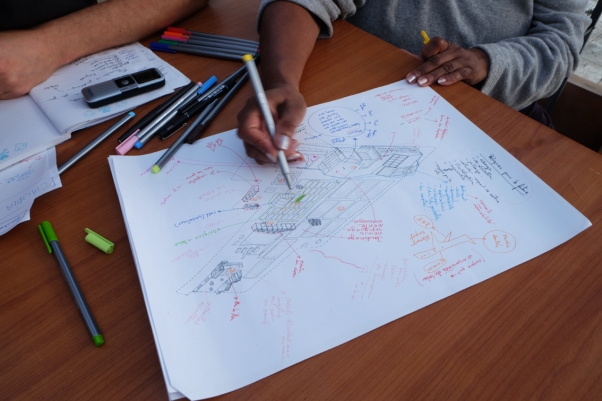 Our plan was to later follow these up with a larger collective mapping workshop, but as it turned out macro-political events intervened. The Paris terrorist attacks of November 13 threw many of the city’s everyday processes out of whack, and the final weeks of 2015 fell away in fragmenting schedules and demands, amid the buzz of mass protest against the COP21 climate talks. Gabriel’s PhD research continues full steam ahead however; you can read some of his excellent work on ‘collective counter cartography’ here. Looking forward to seeing the finished thesis one day soon!

A belated update: first visit to the Jardin d’agronomie tropicale, home of the Historic Library of the CIRAD (Centre de coopération internationale en recherche agronomique pour le développement), made some months ago now, when the trees still had leaves… A fortuitous meeting with Serge Volper, the librarian – agronome documentaliste – charged with looking after this strange and wonderful collection of atlases, pamphlets, reports, photographs, maps, objects, catalogues, and the odd seed.

In an early edition of Henri Mager’s Atlas Colonial Français, he showed me the finely traced contours of a phantom mountain range (the Mountains of Kong) lurking in the north of Africa’s Ivory Coast; or rather in the colonial imaginary of that place, as it never existed on the real, loamy ground. 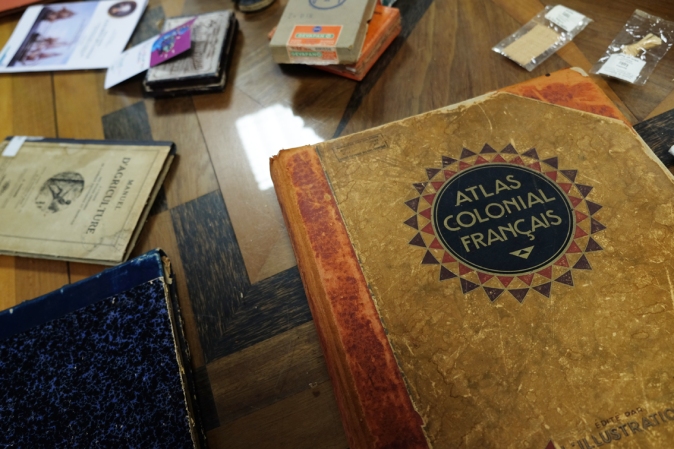 Serge spent many years as an agronomist in Réunion, and is also a fellow maker of Wardian cases (you can spot one I made a long time ago here, helped by Jeremy Prentice of the Tropical Glasshouse at the Royal Melbourne Botanic Gardens), as shown in this fine example of his that cleverly combines features of the two most common styles. 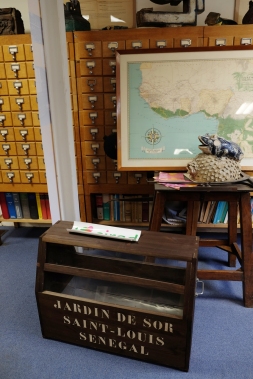 Out in the sprawling garden, perhaps the most atypically unkempt and unpopulated corner of Paris, the remains of the Exposition Coloniale of 1907 are quietly being subsumed by vegetation and decay. Poking around the undergrowth turns up the pavilions of Tunisia, Martinique, Réunion… 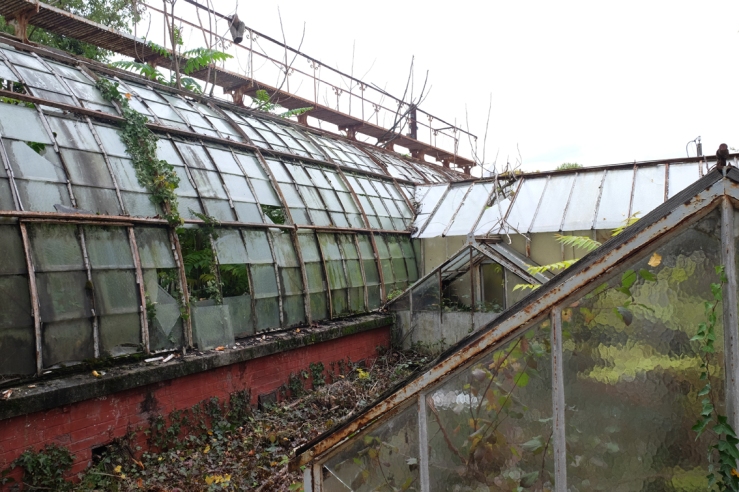 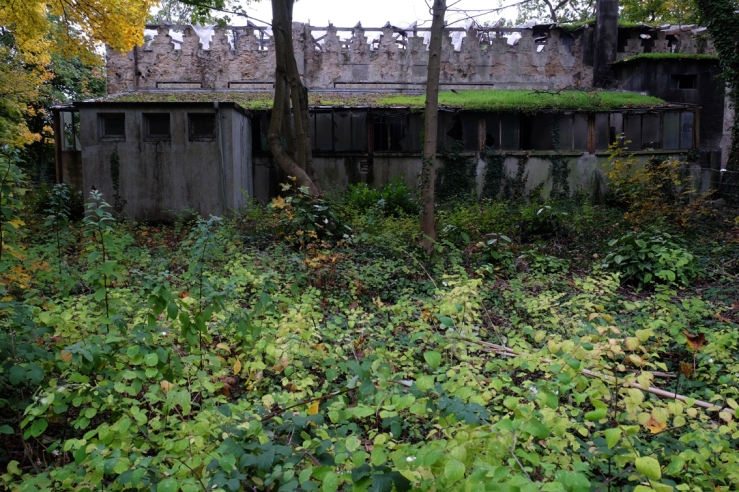 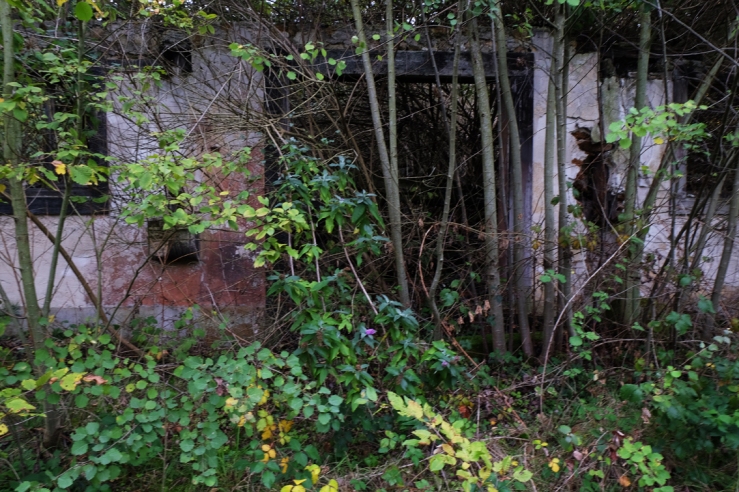 Held on the occasion of the mid-point of my stay at Cité Internationale des Arts, Paris. Before the studio shuffle (Power Institute > AGNSW), I took the opportunity to show some of the other residents a collection of ten maps – coloured pencil drawings – I made recently for an exhibition in Nantes, Mind the Map. These were commissioned by Austrian group Time’s Up, to form part of an interactive screen component illustrating a spectrum of possible futures – in the first map, national borders are completely closed, in the following ones they become more open, until in the last they completely disappear. Given the current stretching of border ideologies going on around Europe right now, it’s a *timely* show…

Also out for perusal were miscellaneous maps and publications I’ve collected since arriving (including a handy just-published book of French conjugations especially for verbs relating to migration), some Plan Bienen works brought over from Berlin, and a micro-exhibition of Collective Disaster‘s ‘Temple of Holy Shit’ terra preta (left behind by Valentina Karga). 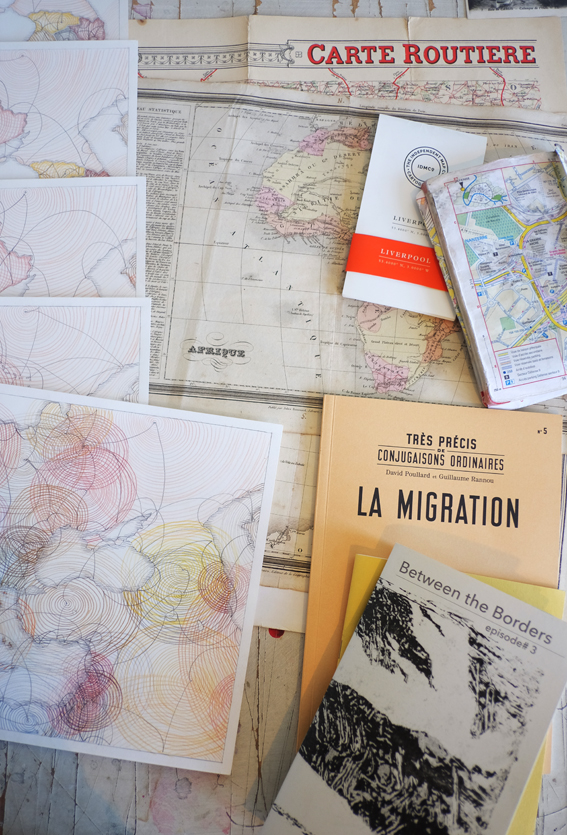 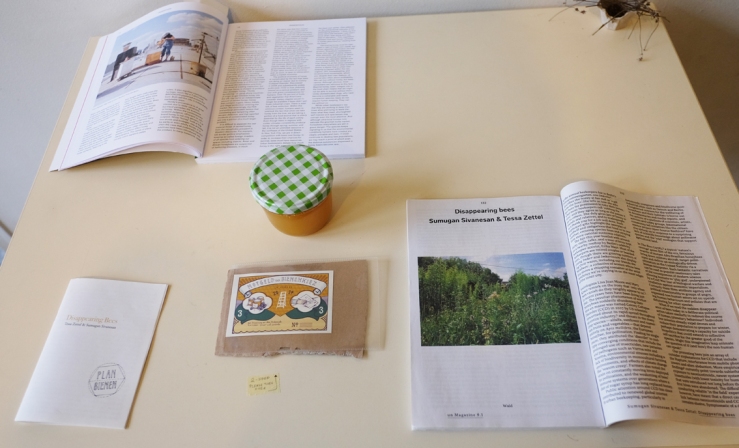 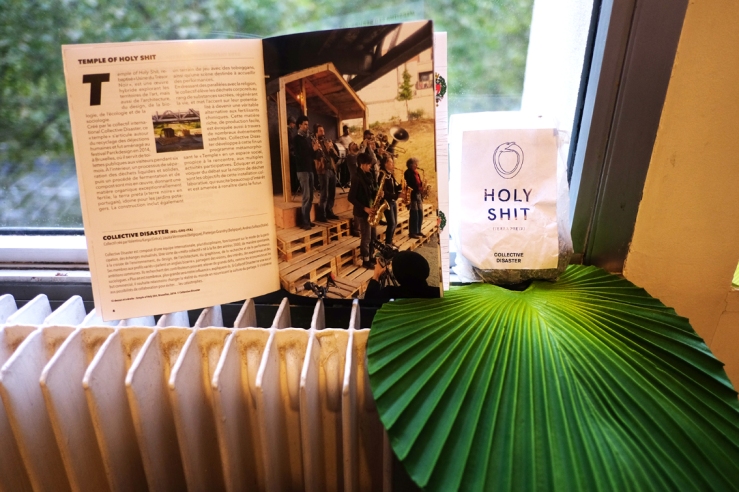 We shared some tea and scones as well.

Arriving in Paris mid-July; it is hot, and though the city is winding down for holidays the streets are still busy. On the heels of a trip by train, ferry and bus, the first place I go is R-Urban, an experiment in ‘civic urban resilience’ on the outskirts of Paris in the banlieue of Colombes, long past the melee of the centre and even the auto barrage of the Peripherique motorway that circumnavigates the city. R-Urban is the work of atelier d’architecture autogérée (aaa), who I’ve been following since our meeting in Sydney for the exhibition & symposium The Right to the City. That was some years ago, and in the meantime Doina & Constantin have directed their energies towards this expanding social architecture and the theoretical framework which sits around it.

The project presents as an interconnected network of resident-run facilities, prototypes that test out new ways of living based around a set of complementary urban functions: housing, economy, urban agriculture and culture. Alongside this the in-progress R-Urban Charter works up from literature on the Commons and collective social practice. Grouped within a bike-able radius, the first pilot production units in Colombes are in varying stages of development – and though what’s emerging is clearly valued by its participants and many distributed supporters, and built on considerable EU funding, the whole enterprise now faces strange and sudden dismantling by a newly-elected hostile local government, proposing instead to build temporary parking, no less.*

The most advanced unit is AgroCité, an experimental farm and community garden stretching out over an open corner block beneath sleepy tenements. There are sunflowers, a chicken coop, pictogram signage, dry toilets and a longish greenhouse, as well as rainwater harvesting and energy production. On the Rue Jules Michelet side is a raised structure with a little shop for self-made local products, a kitchen, and meeting and workshop space, all very open and light. Anyone walking in off the street could stop in to have a look, or if it’s a Thursday, to have a cheap homemade lunch in the Cantine. There’s beekeeping lessons every Wednesday; the place has also seen flea markets, repair cafés, regular non-monetary trading sessions, and various talks – most recently a lecture by Massimo de Angelis. The first time I come it’s for a public discussion with a couple of amiable young artists from Brussels about their plans for Commons Josaphat, a kind of pilot collective micro-city. They showed slides as they talked and afterwards answered some quizzical questions from Agrocité regulars, a mixed group of different ages and socio-cultural backgrounds.

At RecycLab, a short walk away on the other side of the train tracks, Marine and Sean, who’s come over from Canada, work with a bike mechanic on another sweltering afternoon to help a gang of kids from the local social centre fix up six tiny bikes, which they happily rattle away on. Last week they fixed three. The space here is of a different make-up, another stylish timber construction, built in this case off a row of containers lining a mostly unused road between an open field and a high-security fence, though unlike Agrocité it’s still managed by people outside the neighbourhood. There are a couple of offices, a residency space and a kitchen upstairs, downstairs are workshops and equipment for all sorts of re-use and repair activities.

My next visit to Agrocité is for a Recyclab (‘hors de murs’) workshop, building some basic pallet furniture for the terrace. The making was in full-swing when I got in, three or four ladies from the kitchen and garden teams taking turns wielding the power saw to cut parts matching a rough template prepared by Sean. This being their first time doing such a thing, it was a source of great excitement and satisfaction. Later, one gave me a bundle of sweet-smelling mint from the flowering plot that she’s tended over four years. As they worked, fat tomatoes and eggs were sold from a table behind the building, gardeners planted and watered their plots and the collective farm, and Compost School held its regular class near the compost bins. In the evening there was a General Meeting; up for discussion were the impending eviction and possible responses to it, alongside more prosaic dilemmas such as whether or not to take in some additional chickens…

About to enter this mix was ECoHab, the self-build residential arm of the project, slated for a disused site beside the railway line. The land on all three locations is owned by the municipality, and the previous supportive Socialist government had not relinquished a longer lease which would have provided the project with more (legal) resilience. Despite whatever internal contradictions and tensions may conceivably lie behind such a complex collective undertaking, in just a few years a significant social infrastructure has been generated. The community members who inhabit the space have taken ownership and formed a cohesive structure which can accommodate diverse contributors, participants and strangers. To an outsider, R-Urban appears to be a deeply rooted enterprise with huge potential, not least in terms of the wider social imaginary, given aaa’s ability to mobilise their projects within international artist networks.